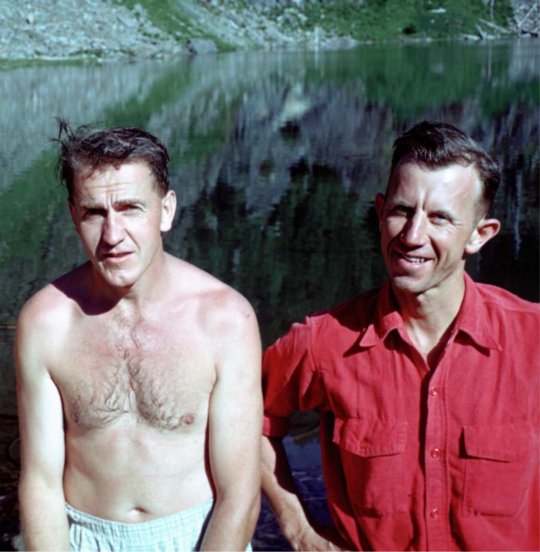 Jack’s Life as a Trail Blazer

In addition to hobbies and interests, Jack had one avocation: hiking in the Cascades, particularly in the Snoqualmie Pass, Stevens Pass, and North Cascades areas. He became a Trail Blazer in 1949, was Vice President in 1958, and President in 1959.

Some people get their jollies via the use of a long clublike object to hit a small spherical ball toward a slightly larger hole anywhere from 200 to 600 yards away, with various kinds of impediments barring the way. If they get that little ball in the hole after a certain number of hits, they are considered to have achieved par; more than that number, they bogeyed the hole; fewer hits and they birdied it. Trail Blazers, especially those of the 1950’s, had no laid out course (aka trails), very few others (aka guides) to show them the correct way, and so on. Impediments they had, though, including huckleberry brush, vine maple, Devil’s club, rock slides, drenching rain, and, once in a great while, sheet lightning.

Then, there were the containers for the fish. Visualize an old-fashioned, 5-gallon milk can. Take that round can and compress it into sort of a rectangular shape, with one side curved inward slightly to fit a person’s back. Actually, the can was attached to a backpack frame with shoulder straps, called a Trapper Nelson pack, which hung over the shoulders. Now, put about 4 1/2 gallons of water in the can. Since one gallon of water weighs about 8 pounds, that is 36 pounds of water. Then, put in about 1 pound of small trout, ranging anywhere from 200 to 2000 to the pound. Finally, add about 3 pounds of tennis ball sized chucks of ice, cover the hole at the top with a piece of burlap, and you have the kind of fish can that Jack and other Trail Blazers carried during the 1950’s and most of the 1960’s.

The typical trip began with bleary-eyed exit from one’s house anywhere from 2:30-4:30 a.m., and ended with struggling re-entry anywhere from 12 to 20 hours later. During the trip to the lake, there was one sure way for a Trail Blazer to revive his tired body, but it was NOT by choice. Sometimes, while carrying the fish can, he would have to get down on his hands and knees to crawl under a downed tree or through some thick brush. As ice water dribbled out of the can onto the back of his neck, and down his back, reflexes increased dramatically, usually accompanied by a loud “UUUUUUH.”

Why would several people struggle for hours through brush, get so far away from civilization that injury could be catastrophic, probe geographic areas in which they were not sure whether the destination did in fact exist, risk exposure to drenching rains, and other such uncivilized activities? Actually, the answer resides in a number of reasons. One of the main reasons is the challenge of achieving the experiences that they did together. They complemented each other, and were the better for it. 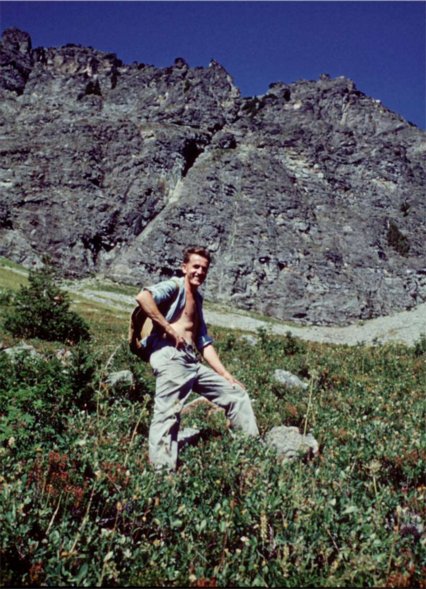 Jack and George Kniert, who became a Trail Blazer in 1948, complemented each other on hikes, and during Trail Blazer meetings. Trip reports is an important part of meetings. Some members give elaborate, detailed reports. Others are the epitome of brevity. Jack’s and Georges fell somewhere in between, sort of. Typically, Jack would report first. “Well,” he would say, “George and I went to a couple lakes last month, but since they were George’s trips, I’ll let him tell about them.” Then, when trip reports reached George, he would start out in a strong voice, “Jack and I went on a couple trips last month. One was to Susan Jane, where we, (as his voice begins to tail off), stocked 250 RB. Then we (as his voice begins to tail off even more), went on to do a little fishing in Swimming Deer Lake. Afterwards, we…”

Jack and George went on many trips together. Their trip reports reflected their trips—quiet, uneventful, safe, successful, and no information about the huge fish they caught. Only after Jack no longer was around to hide his albums did one learn that most of the fish he and George caught were over 20 inches.

Jack made his first recorded trip to Lodge lake on July 17, 1948; he sponsored his first trip in 1951, to Lodge Lake. The litany of lakes that Jack and George visited boggles the mind of those who are familiar with the topography. George almost single handedly opened the Skagit, with Jack accompanying him and pushing him along. They served as mentors to many of the then-young Trail Blazer Turks, as well as children of other Trail Blazers. Jack Rollo, Mike Swayne, Don Ihlendfeldt, Lee Seese, Dave Kilbourn, Grant Barry, Karl Brandmier, Jerry Mattson—those are a few of the Turks and youngsters that George and Jack took with them on their trips.

Jack’s last recorded trip was September 23, 1989, to Ruby Lake with George and Mike. Mike’s comment to one of the daughters at Jack’s funeral was “Here I am going to Ruby Lake, 4,000 feet up, with two old farts and they almost hiked me into the ground; they weren’t supposed to be able to do that!”

On another trip, Cliff Guenther (a WWII ex-paratrooper who had to wear knee braces in the mountains because he squashed his knee joints together on one of his jumps) and Jack were taking fish to a lake. Jack’s daughers, Sonia and Sally, went along. The girls wanted to carry fish, too, so Jack fixed two one-gallon jugs so each would hold some fish. He had each girl carry one of the jugs. Cliff had two German Shepherd dogs that always went with him on trips. On the way to the lake, one of the dogs knocked Sonia over, causing her to lose her fish. That’s the only catastrophe reported about any of Jack’s trips, and it took his daughter to report it.