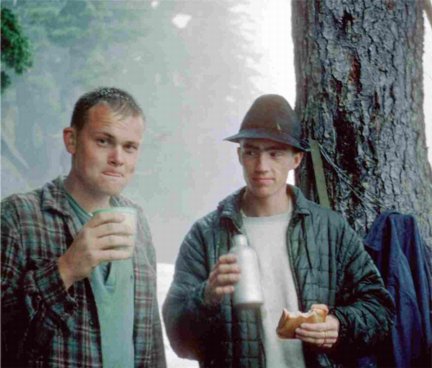 It was an historic date, December 31, 1943, when future Trail Blazer Jan Alan Henderson was born. Not that many people cared at the time. A war was raging and millions of people around the world were dying. My ancestors included a grandfather who homesteaded near Wenatchee about 1870 and helped pioneer the fruit industry there. A grandfather who ran away from home in Norway when he was 14 and became a sailor. He gained US citizenship by enlisting in the army. He fought in France in 1918. My father had been in the Navy in 1941 but was discharged due to a medical condition. He nearly died from tetanus following oral surgery. His father had been a county sheriff in North Dakota about the turn of the century but abandoned the family about 1928. He disappeared and the family carried on.

I grew up in the Mt. Baker area of south Seattle until 1957. The highlights of that period were a summer cabin the family owned on Camano Island, and a brief career doing TV commercials for the local Dairy, Arden Farms. I was the Arden Boy on TV commercials when Ardens sponsored the Gene Autry Show in 1954 and 1955. I spent many hours during that period on the saltwater fishing for what ever I could catch.

In 1960 I took my first hike. A fishing trip to Lake Stuart. We hiked from the Icicle road back then. It was a great disappointment to hear the FS had built a road almost halfway to the lake. The first time I hiked to the lake it took us a day and a half. The last time I hiked there it took about an hour and a half.

High school was devoted to lots of athletic teams and fishing. Even a little studying.

Dick Pearson was a high school friend. We were on the Shoreline Golf team together and became good friends hiking and fishing. Our favorite activity was exploring; finding new lakes or new routes. Activities that don’t seem so popular anymore with the detestable hiking guides that are so abundant.

Dick’s neighbor was a relative of Cliff Lawson. We became interested in the Trail Blazers about 1963 through this contact with Cliff, and started on club trips in 1964. We were elected to membership in 1964. The years 1964-1966 were very active years for me. I went on many trips with Cliff, including many winter trips including skiing. But then I moved to Pullman to finish undergraduate school and get married. For the next couple of years I stayed in touch with several members of the club and printed the annual report for Cliff and Dick as they took their turns being president.

A few members inspired and encouraged me during this time. Their influence has been appreciated by me many times during my life. Primary among them were Milt Tanggard, Cliff Lawson, Clayton Kilbourn and George Kniert. Milt was a father figure. He said many things to me that he has probably forgotten, but for me were inspirations which I have carried ever since. Probably my successes in school and in the profession are at least in part due to Milt’s strong influence. Cliff, George and Clayton all showed the love of wilderness and the lack of fear of hard work. Both are values I have tried to live up to. One of my life’s mottoes I got from George—”Walk softly and carry a big pack.”

One trip I remember particularly well was with Don Barrie, and other Trail Blazers Bernie Ritscher and Jack Mathewson. It was shortly after Doug Barrie’s tragic death in Canada. We planted Phoebe lks and Granite Mountain Pots, and took the loop from Tuck lake to Robin lakes en route. “Life is short—make the most of it.”

One of the last trips during that period was a survey trip to Overcoat lake. Dick Pearson was the trip sponsor and got the Cowbell and Cane for his exuberance. We left the trailhead early and hiking at full speed, we were a mile past our turnoff point before anyone asked the obvious question. Rather than retrace our steps we headed cross-country through Sitka alder and vine maple brush and lost more time. It was amazing we made it to the lake at all. Cliff Lawson and I reached the lake ahead of the others, and there was little time at the lake as our turnaround time had already passed.

To me, fish and fishing was only the excuse to be in the mountains. My favorite activity in the mountains was and continues to be exploring. After several years and many worn-out boots my interests widened to the landscapes, the ecology, the wildlife and the bigger picture. Today I continue to explore the hinterlands of the Cascades, but I also explore the intellectual hinterlands regarding the ecology of the mountains. Questions about why they are the way they are, how they got that way and how humans have changed them are at the core of my professional and private life.

In 1970 I moved to Corvallis to begin graduate work in forestry and ecology. In 1974 I finished a Ph.D. in plant ecology, doing a dissertation on the subalpine meadows in Mt. Rainier N.P. In 1972 I was hired as Assistant Professor in Forest Ecology at Utah State University. After 7 good years in Utah, lots of skiing, many graduate students (two of whom are now College Professors), over a million dollars in research grants, winning the Outstanding Teacher in the Department (twice), and gaining tenure, I decided an opportunity to return to Washington and spend a second career studying the plant ecology of the Cascades and Olympics was too irresistible.

In 1979 I returned to Washington, with a wife of 13 years, a 3-year old son and the opportunity of a lifetime. My office was established in Olympia, even though much of my work would be on the Mt. Baker-Snoqualmie National Forest.

I was divorced in 1986 and moved to Mountlake Terrace in 1990 to continue my job there. In the early 1990’s I ran into Virgil and Jamie at a meeting and was reminded of the great times I had during a previous life as a Trail Blazer I started coming to meetings soon after and continue to participate as much as my personal and professional life permit.