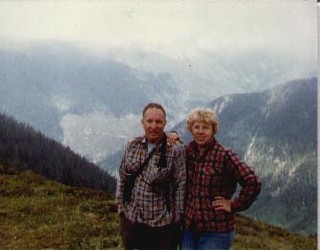 1. Willis Graham Jones (Will or Willie)

7. In the spring of 1964, while on a fishing trip in Eastern Washington, I started talking to Don Barrie about the hiking and fishing trips I had made and he suggested that I attend a meeting of the Trail Blazers. I did and decided it was a wonderful group to join since they liked the same things as I did.

8. Trail Blazers mean, first and foremost, stocking the mountain lakes and thereby improving the fishing and camping experience for everyone. Thus it is important to find new lakes and maintain them at the proper level. Trail Blazers are interested in conservation and must attend the meetings to stay informed and lend support to these issues. Trail Blazers are willing to clean up when other people leave litter around the lakes and trails and be ready to help other members as needed.

9. My favorite Trail Blazer activities are the stocking trips and the meetings with trip reports and slides.

10. My favorite areas in the hills are: the beautiful meadows and lakes around Glacier Peak, such as Diamond and Emerald, Crystal and Meadow. Others include the lakes north of Darrington such as Boulder, Crater, Toketie, Pearl, Cliff and Bluff, and the areas up the North Fork of the Sauk River around Sloan Peak such as Cougar, Coney, Bowser, and Blue Lakes. And finally, the lakes and hills up Finney Creek such as Gee and Little Gee, Shelf and Hawkins, Myrtle Lake and the lakes behind Mt. Higgins.

11. Some of my favorite, memorable trips were with Al Benda who became a Trail Blazer in 1965 and together we stocked Crater and Boulder, Cliff and Bluff, and all the lakes nearby. Our hiking was a bit competitive but always enjoyable. He prided himself on going “ultra-light” while I carried my expedition pack complete with axe for making a campfire. However, when the weather turned bad, he was not adverse to staying by my fire and sharing my steak and potatoes and onions instead of his dry soup mix and crawling into my little tent in the middle of the night.

12. One of the best trips I remember was the Annual Outing, August 29 and 30, 1971, when 67 of the Trail Blazer’s families and friends hiked up a wonderful trail through old growth timber to Summit Lake with it’s flower filled meadows and gorgeous view of Mt. Rainier. That night we all gathered around a huge campfire and sang while Con Mattson played his harmonica. Unfortunately someone’s dog stole a steak that had been buried in the snow, but I won’t mention any names!

13. I am grateful to have been a member of the Trail Blazers and always tried to get the fish I was responsible for into the lakes without loss. This was easier in later years with the use of oxygen and aerators instead of the old cans. I also tried to clean up wherever I went and often came home with a heavier pack than when I started. My whole family took an interest in and helped with the stocking and thus gained a love of the mountains and taking part in a worthwhile activity. The Trail Blazers sponsored my three sons and daughter to the Conservation Camp on Orcas Island where they learned so much. Although it was difficult for David to continue hiking, he very often picked up fish from Jim Mighell’s at Mountlake so we could get an earlier start on Friday night.