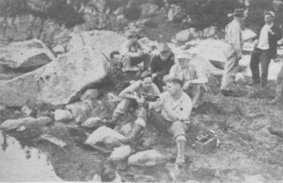 A state biologist accompanies the men on some trips to explain how water can be surveyed and tested as fish habitat. 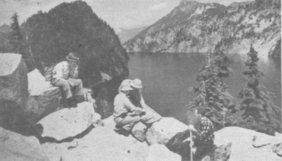 End of trail. Now the men must find their own way to the lakes. 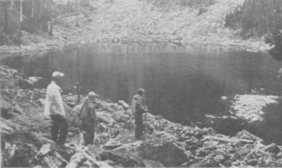 A rock-rimmed pothole, but ideal for rainbows, cutthroats. 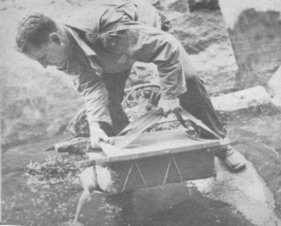 The author, a guest of the club, has the privilege of dumping 1,300 trout fry into a lake far above sea level.

continuing nuisance, and half the men were stung during the trip.

I reached the top of the ridge without mishap but my left thigh muscles knotted up hard as we worked down the trail-less mountainside, which dropped some 400 feet in the half-mile descent to Lake Nordrum, I sure envied Bob Johnson and Frank Mortimer their one-man rubber boats when they paddled down the mile-long lake to the cabin while I had to hike.

The three-sided cedar-shake shelter had been built by club members as a memorial to Bill Simon, a Trail Blazer who was shot down in the South Pacific. No more fitting memorial could have own erected, for Bill truly loved those mountains and had helped stock many a lake.

We swung off our packboards and flopped down to eat our lunches in the open aide of the shelter, facing a fire that earlier arrivals had made. My leg hurt like blazes and I was cold, wet, and shivery, but the fire—and a cup of hot chocolate Don Butler shoved into my hands—soon began to thaw me out.

I was amazed at the dispatch with which the men worked. Scarcely waiting to finish their lunch. Johnson. Mortimer, and Whitham with fishing gear and 300 of the fry in a separate container, headed down a tree-steepled ravine toward Judy, that sapphire-blue lake. A thousand feet below Nordrum, was considered a hot spot, but the men would have to hike over rough terrain for an hour to reach it, and it would take them 2 1/2 hours to return Their only compensation was a chance to to fish a lake beyond the beaten path.

I had the privilege of pouring about 1,300 of the fry Into Nordrum itself. It was good to see that none of them floated belly-up. The temperature of the lake was 52 degrees so we did not have to temper down the can. Then, leaving Butler behind to keep the fire going, we struck off crosscountry with the rest of the fry. By the time we topped a ridge and scrambled over a rockslide or two, my left leg would hardly move. When Charley Yadon had put 300 fry into Rock Lake, I told the gang: to go on without me. I really wanted to see the rest of the lakes and potholes. So did Charley, but be stayed behind with me. We had one consolation—a chance to fish this rock-bound lake.

The rest of the gang bopped across the rocks like wild goats. They straddled the heavily timbered ridge to Lunker and put 100 of the fry into it then dropped down to High Low Lake, in which they planted 5OO.

Pfister and Rollo remained there to fish, while Kniert, Kilbourne, Mathewson, and Tillotson pressed on through the woods, over long stretches of rockslides and across cliffs marked impassable on the maps, to plant the last of the fry in two small potholes. It was dark when they got back to camp after having been on the trail since early morning.

Meanwhile the rest of us had started to work the lakes systematically, to see whether they'd been fished out. Roll-casting with fly rods, heavy lines, and salmon eggs on single hooks. Pfister and Rollo gave High Low a good going over but got no strikes. Charley and I used one-pound-test phantom leaders with two salmon eggs on our hooks, but we had no luck either. Johnson, Mortimer, and Whitham together took ten nine-Inch cutthroats out of Judy and put hack a dozen smaller trout. Although the legal minimum is six inches, Trail Blazers throw back any fish under eight, as being too small to take out of waters that are stocked at such back-breaking expense.

All the lakes in the area had been tested for conditions favorable for trout before being originally stocked, and all bad been normally productive. But the need for restocking High Low and Rock was evident.

Around the fire that night I gathered that these conservation-minded guys had a lot of fun wherever they found it, for they swapped stories of water fights at rest stops, free-for-alls before hitting the sack at night, and dousing of cold water on those who slept too late of a morning.

Much of their humor is directed at members who wander off the trail, although no one has ever been seriously lost. If a man does go off on the wrong tack, be is later presented with a cowbell and white cane, and he's obliged to carry them on all trips, and to club meetings and social events as well.

Members get fun out of raising money for their projects.