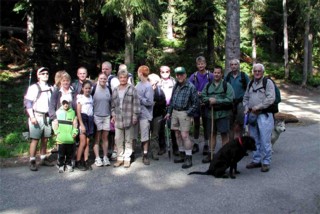 Since the mountains were such a big part of Cliff’s life, the Lawson family decided they wanted to put his ashes in a place that meant a lot to him and the people he knew. It was then decided the Rainy Pass area would be suitable because it is an area that Cliff liked (Cliff was the first to plant County Line, Kitling, Lewis, Windsong and Wing) and an area that would be easy for the family to reach.

The Lawson family met Trail Blazers Ed Lebert, Dan Sjolseth and Mike Swayne in Lynnwood and we proceeded to Rainy Pass. It was a nice morning so we could see some of the mountains that Cliff liked to hike and climb in. As we drove past Darrington I remembered a trip up Boulder Creek to Bandana and a climb of Whitehorse. As we went past Diobsud I remembered the time we planted Diobsud lakes. As we went past Bacon I remembered trips to Triumph and Despair and Bacon Peaks. We stopped at the Diablo Lake overlook where the family could see some of the areas with lakes that Cliff had planted including Jeanita, Pyramid and Upper Bouck and the Snowfield group where Cliff had climbed. 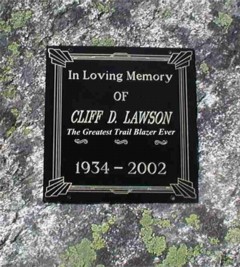 We met Trail Blazers Ed Conroy, Glen Lee, Phil Leatherman and his faithful canine companion at Rainy Pass. It was a good day for shorts but I will be darned if I am going to look like some Californian transplant. Most of the others were not so worried how they looked and were more comfortable in shorts. We kept a slow steady pace up the trail to the junction where the trail heads up to Heather Pass. Phyllis was not sure she wanted to climb all the way to the pass so we headed for Lake Ann. At the lake Phil went on a reconnaissance mission and he recommended the NE corner of the lake as suitable for our purposes. We had a bite to eat and drink then got to work. 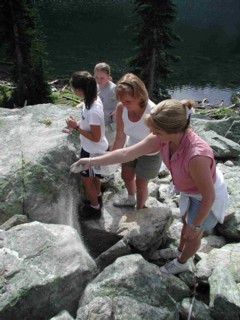 The family had a bronze plaque made for Cliff and brought epoxy to fasten it to a rock. A spot was selected on a rock overlooking the lake. The plaque was attached and we had a ceremonial drink of beer and told stories about trips with Cliff, all of which seemed to involve bivouacking over night, hiking in the dark or climbing brush covered cliffs. Then Cliff’s daughters and grandchildren scattered his ashes among the alpine trees and the rocks. My knife with the bottle opener extended jumped out of my hands and wiggled its way down into the rocks by the plaque. Ed and Dan made heroic efforts to retrieve it but I figured Cliff grabbed it because he needed it so I told them to let it go.

After the ceremony the family left for the trailhead while the Trail Blazers decided to head on up the ridge to look around. It was a great Fall afternoon as we climbed the side hill to the trail and hiked to Heather Pass and then on up to the ridge overlooking Maple Creek. On the way we looked at Black Peak, Lewis Lake, The Golden Horn, and Cutthroat Peak. I looked over to Early Winter Spires and remembered the time in 61 when Cliff and Don Ihlenfeldt and I hiked into the area from the Twisp on Labor Day in 6 inches of new snow to climb what we think was a new route on South Early Winter. 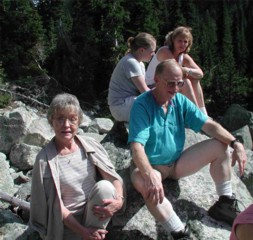 We sat up on the ridge enjoying the view and had another ceremonial Fat Tire. It was soon time to go as we all had long drives. Phil decided to do the loop around the ridge above Rainy Lake while the rest of us went back the way we came. We beat Phil back to the car by less than 5 minutes so he hadn’t wasted any time. Phil announced that the loop would make a great jogging route as there were not a lot of rocks.

I was heading to Rollo’s cabin at Salmon la Sac for the night to meet Jack and Joe Roni to plant fish in Deer Lake on Monday. I asked Ed Conroy if he wanted to stop by that night and take a hike Sunday so he said sure (it is good to be retired). 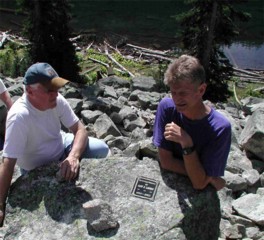 Phil was heading to his cabin on the White River so I asked if he wanted to stop and have dinner with us in Twisp. Phil said he was up for dinner but then made the mistake of saying he would have invited me to spend the night at his cabin except that his wife had some of her girl friends over for the weekend. I said I didn’t mind. Then Phil said it would be too crowded for me as he only had a small place. I said I didn’t mind. This finally drove Phil to say “OK I disinvite you”. Then I said “OK but you are going to have to explain to all those women what entertainment they are going to be missing this weekend”. Phil said he would deal with it as best he could.

It was getting dark as we drove down the Methow after dinner. We cut back on the speed as the deer kill sign read 143 for the year. The crows, ravens and eagles consider this is a good and maybe even a great year.