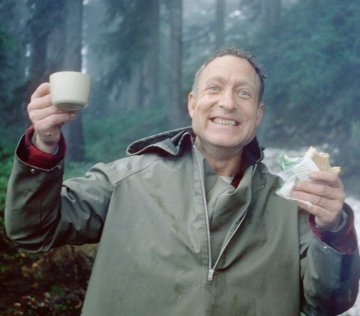 Andy became a member in 1961. That was at a time when life as a Trail Blazer was significantly different from what it is now. Fish stocking techniques were not as refined as they are now. The 5-day work week was much more in place than it is now. Fish stocking trips were pretty well limited to Saturday or Sunday, or both, if the trip was an especially long one. And, stocking techniques pretty well required scheduling a trip at least 3-4 weeks ahead of time, then making the trip regardless of weather conditions.

Beginning in 1960, Andy accompanied Trail Blazer “sponsors” on a number of fish stocking trips. By way of explanation, the February, March, and April meetings include each member proposing each lake that he would like to plant that year. If the Washington Department of Wildlife approves the proposed plant, the person who put the lake up then becomes the sponsor, with responsibility for making sure the lake gets planted. He went on his first trip on July 30, 1960, to Kendall Peaks Lakes, as a visitor. At that time the trip started at the top of Snoqualmie Pass, and took about 4 hours, all off trail, to get to the lakes. Now, because of logging roads, the trip is 20-25 minutes, depending upon whether you are under 50 or over 65.

At the December 1961 meeting Andy became a member. The club wasted no time in bestowing custodianship of one of its trophies upon him. Within the next 6 months he was given the privilege of wearing a Dumbbell around his neck at all formal functions. This trophy is awarded to any member who does something dumb, like follow another Trail Blazer who gets lost. The person who became lost usually is given custodianship of a Cowbell and Cane. It is obvious that Trail Blazer business has its more humorous moments, too. On September 22-23, 1962, Andy sponsored his first trip, to Nazanne and View lakes.

Over the years, Andy nurtured three particular lakes: Edd’s, Bald Eagle, and Nazanne. None is an easy trip, even now. His stocking reports of trips to these lakes tell a lot about Andy, his dedication to improving alpine fishing, his love of the mountains, his willingness to suffer trial and travail to fulfill the obligation he had undertaken; namely, putting trout fingerling in a mountain lake. His stocking reports also contain evidence of how much he enjoyed the comradeship of fellow Trail Blazers.. Finally, his stocking reports show that Andy had a way with words, not only to describe beauty, but also to describe difficulty.

Andy was well organized, and planned his trips carefully. The only problem was that he had no control over the weather. Those of you who remember Lil Abner probably remember Joe Pfffstk. He’s the little fellow that walked around with a rain cloud over his head all the time. That was Andy on most of his trips during the 1960’s. On August 9, 1964 he sponsored a stocking trip to Dream Lake. “The weather: raining hard,” began his report. He went on to say “This trip was a real example of doing what had to be done. On the second step, everyone was wet to the skin. As we approached the lake, we encountered snow patches and found the lake about 2/3 open, with considerable snow around the shoreline.”

His next trip, on August 29, 1964, was to Nazanne. “Weather went from fair to foul. What was to be a two-day, sunny trip turned foul on the way to the lake. By the time the group got to the lake, the rain was falling hard with the wind blowing a mild gale.”

On September 12-13, 1964, he finally went on a trip where he could “enjoy the unusually beautiful weather.” It was one of his most enjoyable trips, too, for he and his brother, Darrell, made the trip together. It also was an unforgettable trip. They were at the fish hatchery at 6 a.m. to get the fish. After leaving their car, they traveled by trail part of the way, then cross country for the remainder of the trip. It was the remainder that almost did in the two brothers, forever. The trip was so long, and so difficult, that they got caught by darkness before reaching the lake. Yet, so far as Andy was concerned, they could not stop, for the fish would die. So, they continued on. “We started down through the rocks and slides, first groping, but as our eyes became accustomed to the darkness our momentum increased, as the glitter of the lake water could be seen through the trees in the deep distance.” Andy had sacrificed his sleeping bag on a rock slide on the way in, rather than sacrifice the fish; thus, he and Darrell had only one sleeping bag between them. “Brother and brother shared one sleeping bag as a pallet on a pile of rocks, with a log for a pillow. Playing fireman all night was such a strain or the bed was so good that after unhurriedly getting breakfast and starting on the return trip, the $2.98 Ingersol pocket watch that my wife had run through the washing machine, showed 11:00 a.m. We were sure the watch was incorrect and it wasn’t until we got back to civilization that we were convinced we had enjoyed our slumber so much. We crawled up through the rockslides and retrieved my bed roll. Things sure looked different in the daylight. Up over the saddle and down the timbered slopes to finally end up traveling down the trail to the car. The only thoughts were of the satisfaction of doing what was only a desire in the beginning and sharing an experience with my brother, to be laughed at and enjoyed again and again in years to come at each recollection.”

Three years later, in 1967, Andy went to Bald Eagle Lake again. And again, in the sunshine. He took a different route this time. “It was a long, tedious, uneventful climb up the slippery stream bed that carries the outlet waters from the small tarn that ultimately would become their final confinement of everlasting peace. There, after several hours of crawling through the forbidding growth of vegetation, known only to those who attempt to penetrate nature’s way of keeping her treasured beauty unspoiled, the tiny creations were ceremoniously released. May they grow to magnificent specimens and glory in all the splendor of their new home.”

By now it should be obvious that Andy had a way with words. He didn’t say much, but when he did say something, many people frequently were surprised at how articulate he was … and, sometimes, at his vehemence. Those of us who happened to be at meetings when Andy decided to say something realized that he could exhibit the characteristics of a volcano. During meetings Andy would say nothing while others talked and talked and talked. If the issue was of importance to Andy, there would come a time when he could sit in silence no longer. One could tell when that time was arriving. His face got redder and redder. Eventually, he would jump up and erupt with words, gestures, and intensity. Just as abruptly, he would sit down, and say nothing more.

Then there was the other side. Andy was a combination of poet, humorist, and “word artist.” He was good at using words to describe his feelings. His feelings, his attitudes, and his outlook on life can be gleaned by reading his 1966 President’s letter and his stocking reports. In his 1966 President’s letter he began with “The challenging and rewarding experience of serving this past year as President of the Trail Blazers will always remain a pleasantly memorable one. You have left a souvenir in my heart to remind me of the privilege I’ve had being your Exalted Slave.” That’s the kind of back-handed compliment Trail Blazers appreciate.

But Andy had still more to say. “The true reward has been in sharing the congenial fellowship of sincere and spirited sportsmen, enjoying the fruits of their efforts and being allowed to partake of their knowledge.” Andy may have revealed more about himself on paper than he did in person. Stand next to him and talk, and you heard the usual things. You didn’t really get much insight into any of his feelings, what he really felt. But, when you read his stocking reports, you realize that he not only saw subtle aspects of life and nature, but he also had a capability to express them rather eloquently, and effectively. I suspect very few Trail Blazers knew the REAL Andy. I’m sure the younger members didn’t know him, because since about 1983, the year Smitty died, he almost never said anything. They have had no chance to read his stocking reports of the 1960’s and 70’s, which is where one can get a good feeling for Andy’s character, humor, and his outlook on life.

For vivid description, his September 15, 1966, Edd’s Lake report is hard to beat. “The trip that was, but never should have been - except for the likes of dedicated members of the Trail Blazers…It seemed the wrath of the Gods had been released and a cold driving rain was the stage setting, defying any sane person from venturing forth….Boldly everyone started putting on their rain gear in the steady downpour, each with hidden reluctance, hoping that someone would be brave enough to abort the trip. Their hopeful glances in the sponsor’s direction, who in turn was secretly acceptable to being numerically overpowered. No one wanted to be branded the weak one, to scuttle the promotion to ‘better alpine fishing.’ In the face of all this misery, knowing the whirly bird was ravishing the forthcoming home of our precious cargo, the crew charged up the trail full of false desire. As one looked up toward Rampart Ridge, the draining rivulets looks like a huge veil of cascading threads of silver falling into the valley below. Soon, each crossing of a stream had grown from ankle depth to thigh deep raging torrents…..A long, wet sloppy trip.”

I am sorry and apologetic that my eulogy to Andy does not come even near the level that his did to his friend, Smitty in 1983. In my judgment, Andy’s epitaph to Smitty is Andy looking in a mirror. I shall quote excerpts from Andy’s eulogy to Smitty, but use Andy’s name instead of Smitty’s: “As one passes through this world, he leaves his mark as he touches the lives of those he contacts along the way….It seems that when one penetrates Mother Nature’s treasures, he drops his true being, not observed by everyday routine contacts. This we shared with each other. [Andy] was willing to share his knowledge and to aid others to enjoy the fruits of their efforts - willing to support more than his share of the load…He disliked where crowds of people are found…His fishing was an endless source of delight and an act of small rebellion, because trout do not lie or cheat and cannot be bribed, but respond to quietude, humility, and endless patience. In the mountains, the tall trees, the huckleberry brush, the crystal clear lakes and streams, he found solitude without loneliness. [Andy] was a true Trail Blazer in every sense of the word. He was active in club functions, a true conservationist, and a good friend.”