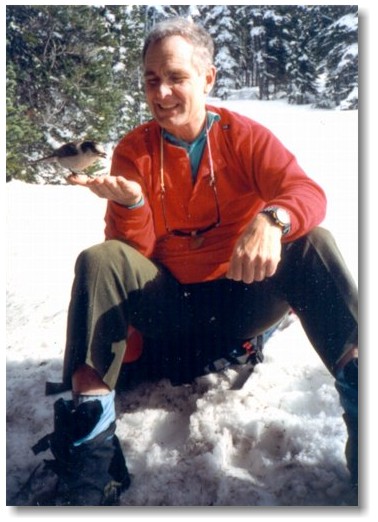 Stan Davis was a credit to the Trail Blazers and the human race. He endeared himself immediately to everyone he met; with an easy smile and a can-do attitude, you knew that he was someone who could be a friend and a valuable asset to your organization.

Stan joined the Trail Blazers in 1985 and was elected secretary that same year. He quickly moved up through the chairs to become VP in 1986 and President in 1987.

Over the 10 year period he was actively involved in the club, he planted or helped to plant 60+ lakes. A tireless hiker, he willingly packed his share of the fish and provided more than his share of the laughs. When not hiking with fellow Trail Blazers, he often took one of his sons or a skiing buddy along with him.

Stan had many loves that involved the mountains. His other consuming passion was telemark skiing. As a member and an officer in the Washington Ski Touring Club, he often missed many of our winter month meetings, yet he continued to stock lakes every summer and attend meetings when the snow melted. Those who skied with Stan discovered the same strength, humor, and dedication he brought to the Trail Blazers.

Another of Stan’s interests was mountain climbing. He successfully climbed Mt. Hood, Mt. Rainier, Mt. Baker, and Mt. Adams. On one of my first climbs with Stan he took skis (naturally). On that descent of Mt. Adams in 1989 he fell and broke one of his skis. He told me afterwards that was the third pair he’d broken that season!

When Stan needed a bone marrow transplant, a very expensive operation, he personally came to a club meeting to speak against the club donating money to help him with his expenses. He didn’t want to set a precedent. Stan we miss your impish grin. Enjoy the eternal corn snow and good fishing.

On this cool and overcast, yet glorious Sunday morning in August, we picked up the fish at Tokul Creek for the stocking mission ahead. I was anxious to take this short walk into the woods to stock the tiny lakes which had been approved by the WDFW. Only four days before, my doctors nodded with approval and said I could go wherever my body would take me . . . words which completely reversed their earlier instructions. Just ten days before, they told me “hang up your pack” and “stay at sea level.” The very real fear that I would never again walk in the mountains lingered in their words. I had walked into the hospital after finding myself so weak I could barely climb the front steps of my home -- stopping to rest on each riser, gasping for breath at each step, pounding heart within my chest, I wondered what was happening to me. A week of tests, indecision, treatment, fear, and doubts yielded the doctors’ new instructions. Their words came straight from the Mountain Gods, straight from Mountain Heaven. “Go,” they said. I hesitated only long enough for the fish to be prepared at Tokul Creek.

On this trip I wanted to hug all the trees, caress the rocks, fondle the soil, hear the waterfalls, taste the berries, talk to the fish, listen to a pika “eeeek” and to a marmot whistle, feed a camp robber jay, reach to touch the sky and lie in the heather to dream of times past. Oh, how I longed to be in the mountains. I wanted to feel the breeze in my face and the rain on my neck. Biting bugs were welcome.

After a few tentative steps along the trail i snapped the end of Fir branch, put the cracked limb to my nose and inhaled. Rich aromas of freshly released ecstasy exploded within my nostrils, reminding me of the scent of all my walks in the woods. The fragrance filled my soul with joy, proof of my presence, proof I was alive, and proof I could experience the woods again. With this soothing sensual perfection gently held beneath my nose, I proceeded along the trail. In a few minutes the branch dropped from my grasp, I was satisfied that I really was there.

Slowly, we walked to the lakes. Ever so slowly, the pace was set by my deliberate tentativeness. Each step was measured to include every sight, every smell, and every sound.I was in heaven. my recent hell of hospitals and probing tests was dimming into a foggy memory. fading were the doctors' devasting diagnosis, the repeated transfusions, the prospect of being days from death, and the overwhelming uncertainty of my future. Here, I was one with the woods and I was one with the mountains. My body throbbed with immeasurable joy and trembled with thankful appreciation of the gift of once more being there to absorb the spirit of my mountains.

In a short time we arrived at the tiny pots of clear, cold water. Each was teeming with life. Such beautiful little tarns, nestled together at the base of a rock slide and shaded by the majestic rock wall beneath the towering peak above. A slight rain squall blew past and prodded us to slip into our rain gear. Drops ran down my cheeks, cooled by a heaven-sent breeze. the sensation of the gentle, wet spray massaging my face was so, so welcome. Minutes later, the sprinkle passed and rays of warming sunshine returned through the gaps between the clouds.

Half an hour later we released the tiny fish in the shallows, sheltered areas where they milled around in little schools. Our new fingerlines swam into their new homes and immediately began feeding. All seemed healthy. A few wandered into deeper water and found some of the old timers waiting to swallow them. My son, Chris, tried a lure that looked like a “250-to-the-pound rainbow trout,” but the residents were crafty and he had no success.

The walk back to the car was slower yet. Huckelberries and blueberries lined the path; soon all three of us had purple lips and purple teeth as we grazed on the aboundantly sweet harvest. Ginnie filled a quart water bottle with berries. Chris filled two plastic bags. I filled my stomach, my heart, and my soul.

Halfway out, I sat down. Surrounded by short blueberry plants, I picked several of the tiny, purple globs and pooped their magic into my mouth. Their distinctive flavor exploded, sending pleasing memories of past hikes skipping through my mind. Savoring the sweetness, I studied the outline of the nearby mountain against the cloudy sky and thanked my good fortune for being alive and in the mountains. How could life be any sweeter than this moment in my mountains; now I know I can return again, and again.

Along on the trip: Chris Davis and Ginnie Miller